When solidarity is for real 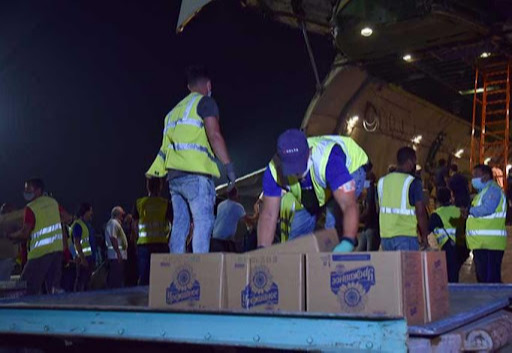 The United States insists on saying that it is concerned about the Cuban people... a concern that ironically translates into the ongoing genocidal blockade that hinders the fight against COVID-19.

On the other hand, there are many nations and friends who truly and in solidarity, without a hidden agenda, support the island nation in the face of the difficult situation due to the increase in cases of COVID and certain deficiencies caused by the hostile U.S. policy.

Many are the signs of support, which have also materialized with the shipment of food and medical supplies.  The Cuban government is very grateful for this assistance and considers it to be extremely valuable.

Russia marked the beginning of the shipment of aid at the governmental level, a sign of the excellent relations of friendship and brotherhood that unite both countries.  Two huge cargo planes with more than 80 tons of supplies arrived in our country last week.

Other friendly countries have been joining Moscow's gesture of solidarity.  Among them is Mexico, whose President Andrés Manuel López Obrador has dedicated emotional and sincere words to Cuba, with which he pointed out a very fruitful bilateral relationship in all fields.

The Mexican president called for the recent vote at the UN to condemn the blockade -- 184 to 2 -- to be translated into actions to help the people of Cuba.  And the government of Mexico sent three ships to Cuba.  One of them with fuel and the other two with food, medicine and oxygen for COVID-19 patients.

In Latin America, Bolivia and Nicaragua have also expressed their willingness to help Cuba, a nation that has left its mark of solidarity on the continent, especially in health and education.

In this regard, Bolivian President Luis Arce stressed that from Cuba we learned that solidarity is to share the little we have with those who need it most.  And in this sense, he affirmed that humanitarian assistance will be sent to the Cuban people, who are currently experiencing difficulties due to the criminal U.S. blockade.

Nicaraguan authorities also expressed their gratitude to Nicaragua, which is the inspiration, they emphasized, of so many free countries in the world.

Solidarity also arrives from distant Vietnam.  The Asian country has donated 12,000 tons of rice to face the food difficulties caused by the U.S. blockade and the pandemic.

The initiative of these governments joins that of civil society organizations in several Latin American and Caribbean countries, a region that highly values Cuban solidarity.

In Europe, medical material has also been collected, especially syringes to support the vaccination campaign in the archipelago, which is carried out with its own drugs, since it has proved to be highly effective.

There have been many expressions of solidarity that Cuba highly values and is very grateful to receive because we know that they come from those who ask for nothing in return.

#Mexico | "The main motivation for this plan is the unequal access to vaccination..there are countries such as Chile with a high percentage of vaccinated citizens and Haiti, Guatemala, and Nicaragua with low percentages," Barcena said.https://t.co/xyT6Zl44cs