Moncada's legacy in another scenario of struggle 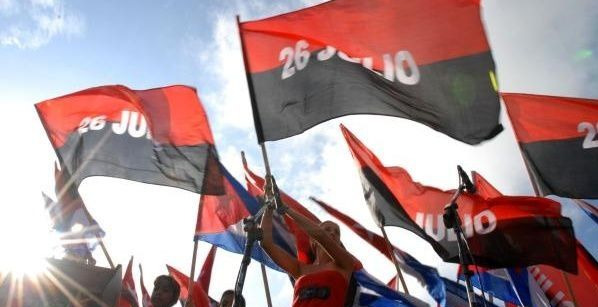 Cubans celebrate "National Rebellion Day" in tribute to the Centennial Generation that attacked two barracks belonging to Fulgencio Batista's dictatorship, under very adverse circumstances, which encourages us to reflect on those actions and renew our resolve to face the current difficulties.

This is an opportunity  to recall the exemplary work of those who, commanded by the young lawyer Fidel Castro, fought with only few resources against bastions of tyranny, such as the Moncada Barracks.

The July 26th attacks served as a spark to build unity and advance towards higher levels of organization and insurrection in the mountains.

The rebels of the Sierra Maestra bequeathed their humanist vocation and the need to join forces.

It is a lesson that people are taking up again today, when dangers are looming over a country that is the target of a gigantic media operation and so-called "soft coup" led by the United States.

The objective is to take advantage of the undeniable shortcomings, dissatisfactions and unrest after a brutal tightening of the U.S. blockade, sustained by the current Democratic administration.

The spiral of a pandemic by the coronavirus, despite effective mechanisms of the free health system and a vaccination campaign with local injectables, made the scenario more pressing for Cuba.

For Washington and the counterrevolutionary elements that play along, this is a suitable moment to shock the country, which explains the recent disorders.

Clearly, the demonstrations were subsequently joined by protesters with understandable dissatisfaction.

However, Cuba is far from presenting a context such as the one that has been depicted in the multi-media platforms and the empire's Western corporate press.

Today there is talk of summary trials and nothing is said about the due application of laws to vandals and inciters of violence.

For the majority of citizens, it is imperative to rescue the already achieved order to face the pandemic and the challenges of the battered economy.

In this sense, a letter from more than 400 personalities published in The New York Times asking for an end to the blockade truly stimulates our struggle.

As well as the enthusiastic appeal of Mexican President Andrés Manuel López Obrador to recognize the resistance of the Cuban people against the United States.

Along with these and other encouragements, there is not a more sensitive and timely day to recall the courage of those who 68 years ago showed us the way, when many branded them as misguided.

#Mexico | "The main motivation for this plan is the unequal access to vaccination..there are countries such as Chile with a high percentage of vaccinated citizens and Haiti, Guatemala, and Nicaragua with low percentages," Barcena said.https://t.co/xyT6Zl44cs